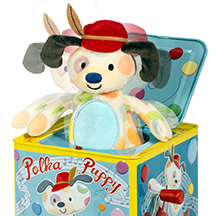 Schylling’s Polka Puppy Jack-in-the-Box brings a whimsical new dancing feature to the traditional jack-in-the-box.  The earliest jack-in-the-box is thought to have been made as a birthday gift for a prince in Germany during the 1500’s.  Today, Schylling has created a new -jack-in-the-box with an innovative play experience, perfect for its youngest fans.  The Polka Puppy pops up like a traditional Jack-in-the-Box but after it pops up, the adorable Puppy dances back and forth to the tune of ‘Pop Goes the Weasel.’ The puppy dances for as long as the handle is turned.  The adorable dancing feature is a great way to introduce a young child to jack-in-the-box play.  Polka Puppy allows young children to first get used to the character and gentle dancing movements and soon they are ready for the surprise popping action.  The graphics on the sides are embossed, playful images that will appeal to children of all ages.

The Story Book Nesting Dolls feature nesting characters from the classic story Goldilocks and the Three Bears.  The original ‘matryoshka’ or ‘babushka’ nesting doll set was made in Russia during the late 1800’s.  Schylling’s Story Book Nesting Dolls are the first ever to be made of tin.  This allows for colorful lithographed printing over the entire surface of the toy creating detailed character designs on each doll.  The result is a beautiful set of Goldilocks and the Three Bears characters that will be “just right” in any toybox or toy shelf.

The Atomic Sparking Ray Gun captures the authentic spirit of 1950’s tin toys. Schylling’s tin Ray Gun produces a continuous stream of sparks and classic mechanical whirring sound when the trigger is pulled.  Packaged in an open face box, the vibrant colors and patterns will make children young and old feel like they’re ready for the next sci-fi movie!

“Schylling is the leader when it comes to tin toys,” said Paul Weingard, President of Schylling. “We are continuing to break the rules and innovate when it comes to all our toys. We are adding new features to toys that have long been considered unchangeable and traditional. Expect even more in the Schylling tin line as 2017 unfolds.”

All three tin toys will be available and shipping Q1 of 2017.

About Schylling Inc.
For over forty years, Schylling, Inc. has specialized in timeless toys. We started out making delightful playthings from a bygone era. Over time we’ve built a distinctive collection of innovative gifts and traditional toys with nostalgic appeal for all ages. As an award-winning toy company located in North Andover, MA on the beautiful North Shore of Boston, Schylling works to create the future in toys by captivating new designs and intriguing refreshes and innovations of toys from the past. Schylling offers original and distributed lines of toys. Among these lines are the iconic tin toys that have been an important part of the history of the company. Schylling is the world leader in the manufacture of Jack-in-the-Box toys and tin Kaleidoscopes, among others. Toy lines include the Nanoblock, PaperNano and Terrablock family of products, the Steelworks line of construction toys, the original Lava Lamp series, Turbospoke, Crazy Foam, Fisher-Price Classics, the Zuru Bunch-o-Balloons, illooms LED balloons, the Lottie line of dolls, the Style Model line, the recently added Tiger Tribe arts and crafts playset line. Schylling’s long list of toy categories including Classics, Games, Retro Toys, Ride-Ons, Pretend Play, Just for Fun, Magic, Arts & Crafts, Great Outdoors, Tents, Die-Cast, Money Matters, Music, Sock Monkey, and BeBots tin wind-ups featuring Star Wars and Pixar characters as well as Curious George. Schylling is proud of its heritage and in offering high quality, safe and creative products that lead the toy industry. Visit the company website at www.Schylling.com or Facebook page at www.facebook.com/SchyllingToys

Due to global supply chain challenges we’re temporarily pausing on taking new orders. Please look for Schylling products at retailers near you and across the web.

To be notified when we start shipping again, and to receive a 20% off coupon, add your email in the form below.